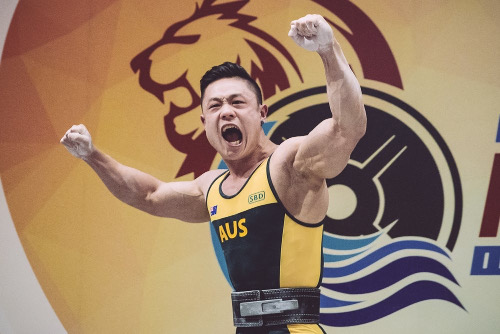 Cosmopolitan Singapore was the venue for 2017’s Oceania Championships, along with the Pacific Invitational. The latter event brought in Japan, Korea, Pakistan and Singapore, as well as the traditional Oceania nations. The result was over 200 lifters and a great competition organized by Say Tan and his crack SPF team.

On the lifting platform World Records came right from Day 1. Daiki Kodama and Yusuke Suzuki avoided each other by going 74kg & 83kg respectively and the result was WRs in both classes, 212kg & 211kg. Wendy Chan of Australia was also in on the WR action with Junior SQ, DL & Total results of 132 ½kg, 150kg & 355 ½kg.

But as always the star of the show was Jezza Uepa from Nauru. Jezza went 460kg in the Squat and was ever so close on a WR 478 kg, before going on to total 1042 ½ kg, one of the World’s all time great performances.

Other big results came from Babra Auva’a with 470g at 72kg, Nolene Kingi an improving 530kg at 84+kg and Singapore’s Clinton Lee, an even 700g at 74kg. The team from Papua New Guinea stood out with their improved technique and results across the board, led by Vagi Henry’s 835kg at 120+ and Linda Pulsen’s 460kg at 72kg. PNG was the top team at the 2015 Pacific Games and will be a force again in 2018.

And the venue for our big event in that year will be Nauru. The Pacific hub of Powerlifting has confirmed the Oceania Championships for the first week of December in 2018 at their national stadium. With their government behind it, this surely will be the highest standard Oceania’s ever.